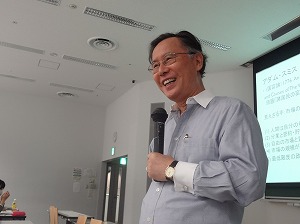 On 12th June 2012, Professor Hasegawa delivered a lecture on liberalism and international political economy. Adam Smith claimed that wealth of nation increases if economic activities are left to the invisible hand. David Ricardo said that the theory of comparative advantage explains the benefit of free trade. They insisted that a government should leave men and their activities alone and not to regulate them. Liberalism has three variations. It is market, institutional and republican liberalism. Interdependence makes nation states to seek stability and peace while international organizations set norms and rules to enable states to cooperate. Secondly, Professor Hasegawa explained the Neo-liberalism. The market should function without government intervention. Margaret Thatcher and Ronald Reagan are the ones who carried this out. By various systems such as GATT or WTO, the doctrine advocating global free market gained strength. Then John Williamson made the Washington consensus which called for restructuring, deregulation, tax reform, tariff abolition, free capital movement, etc. Thirdly, Professor Hasegawa explained the implications of financial crises that took place during the last two decades The Asian Financial Crisis started in Thailand and spread to Indonesia, South Korea and other parts of Asia and Russia in late 1990s. This was a sudden loss of confidence in national currencies of these countries. The world financial crisis that continues up to today began by the extension of excess subprime loans in 2007. Finally, he explained the nature and extent of the current European sovereign debt crisis. Many European countries are suffering from enormous debts from huge public expenditure and capital shortage in banks. The amount of public expenditures has been kept relatively low in comparison with other advanced countries. The number of public servants in Japan is less than almost all other industrialized countries of Europe and North America. Japanese banks which had most serious problem in the 1990s now have low loan deposit ratios and stronger a capital liquidity position than European banks. But, the level of Japan`s government and public sector debt is excessively high at about twice the amount of Japan’s gross domestic product. The public debt has to be curtailed lest it would eventually impact the national solvency. (Daiki Kawabe)