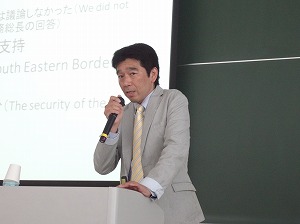 On 4th July 2012, Mr. Tomonori Yoshizaki, Director of the Security Studies Department of the National Institute for Defense Studies (NIDS) of the Ministry of Defense, delivered a lecture on the evolving roles of international organizations from the viewpoint of collective security. First, he explained the collective security mechanism and three criteria of effective collective security, namely certainly, utility and inclusivity. Secondly, he provided a detailed explanation about the origin, growth and transformation of the North Atlantic Treaty Organization (NATO). As its mission goal, NATO started with the collective defense of the North Atlantic region during the Cold War. It then transformed itself with the expansion of its membership from 12 to 28 countries many of which are from the Eastern Europe and with the addition of providing security to not only its members but also countries suffering from humanitarian and other crisis. Professor Yoshizaki noted in summary that NATO had acquired a strategic nature in its crisis management by undertaking military interventions of coercive diplomacy and adopting a comprehensive approach aimed at protecting civilians in crisis, stabilization and security sector reform. The areas and countries in which NATO has undertaken military operations included Bosnia, Kosovo, Afghanistan and Libya. Professor Yoshizaki also explained the difference between Libyan and Syrian situations and the implications of the establishment of Shanghai Cooperation Organization (SCO). (Yuko Honda)