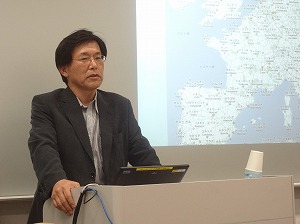 On 9th July 2012, Prof. Satoru Kurosawa, Former Resident Representative of JICA Balkan Office, delivered a lecture on the contributions of JICA to the Balkan States, particularly for the seminar students who will go to the Former Yugoslavia as the study-tour. In his lecture, he explained the current situation in Serbia and the close friendship between Serbia and Japan. First, he referred to Serbian role as a part of Europe, Serbian fame around the world and Yugoslavian religion. Second, he also mentioned the reason why Serbia has got along with Japan. After his presentation, some seminar students who will go to the Former Yugoslavia questioned him on the historical and political issues in the Former Yugoslavia. (Kohei Yokota)