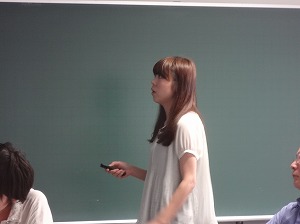 On June 26th 2012, the Peace Building Group and the Development Economic Group made presentations on the two chapters of “UNDERSTANDING PEACEKEEPING”.
In the 4th period, the Peace Building Group explained the Chapter 6: Preventive Deployment. First, the Peace Building Group described how to prevent the occurrence of conflict and what tasks are fit for preventive deployments. Also, they mentioned that the primary goal of peace operations is to prevent conflict in the first place. In addition, conflict prevention chain suggested by Ken Menkhaus and the 6 links in this chain were discussed. Second, they talked about the two real cases of preventive deployment: UNPREDEP in Macedonia and EUFOR RD Congo. According to the presenters, the important aspect with the former mission was the president of Macedonia himself made the request to UN for help. Finally, they mentioned that the reason why there are relatively few examples of preventive deployments is due to the five political challenges and dilemmas. They concluded that the attention and intervention by international organizations is needed and the fast response from these organizations is essential.
In the 5th period, the Development Economic Group presented Chapter 7: Traditional Peacekeeping. First, the Development Economic Group explained the holy trinity: consent, impartiality and minimum use of force. The last conception refers to non-use of force except for self-defense, said Professor Hasegawa. Second, they told that traditional peacekeeping is based on observer mission by the UN. Also, they presented three real cases of traditional peacekeeping missions: UNEF1 in Egypt, UNFICYP in Cyprus and UNMEE in Ethiopia and Eritrea. And finally, Professor Hasegawa mentioned that POC (protection of civilians) originated in R2P (responsibility to protect) is recently focused on.
(Minshik KIM)