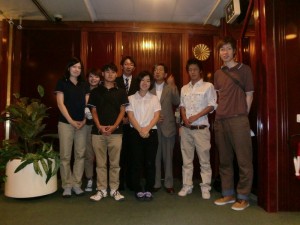 On 28th August, Mr. Kazuaki Kameda, Deputy Head of Mission Minister Counselor of Japanese Embassy in Serbia and Mr.Wataru Yokohama, the Researcher gave the Balkan group members an instructive lecture. At first, Mr. Kameda shared with us a distribution map of the ethnic groups in the period of the former Yugoslavia. He explained the history from the immigration of Slavs in 7th century to the collapsing of Federal Republic of Yugoslavia. Also Mr. Kameda mentioned currently political issues and some problems in Serbia. He suggested us that Serbia has to achieve a stable and peaceful life in their mind in general. But there are some issues such as the ethnicity which needs to be considered. (Mai Uchida)