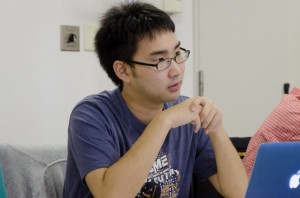 On 11th May 2013, the 2nd study meeting of the Peacebuilding Study Group was held in a conference room in the 80-nenkan building at Hosei University. In this meeting, three of the eight participants made presentations on the “Responsibility to Protect” (R2P) and the “Protection of Civilians” (POC), based on the UNU book “Norms of Protection: Responsibility to Protect, Protection of Civilians and Their Interaction.”
First, Mr. Taichiro Fujino, who is a graduate student at Hitotsubashi University, made a presentation about the Chapter 1, entitled “Game Change and Regime Change.” He introduced the history of and arguments for and against R2P.
Next, Mr. Shogo Yoshida, who is an undergraduate student at Hosei University, discussed Chapter 2, “The Protection of Civilians in Armed Conflict: Four Concepts,” and Chapter 3, “The Responsibility to Protect and the Protection of Civilians in Armed Conflict: Overlap and Contrast.” He explained the four types of POC: Combatant POC, Peacekeeping POC, Security Council POC, and Humanitarian POC. He also compared POC with R2P in terms of their similarities, interactions, and differences.
Finally, Mr. Jason Pratt, who is a graduate student at Hosei University, spoke on the conclusion of the book and analyzed R2P and POC as they apply to the modern situation in Afghanistan.
(Shogo Yoshida)

Mr. Taichiro Fujino gave a presentation on Chapter 1 “ The Responsibility to Protect: Game Change and Regime Change,” written by Hugh Breakey. The author mainly discusses the relation between R2P and regime change by detailing the process of initiating R2P. Breakey mentions that the international community has responsibility to protect people when states are not themselves capable or are unwilling to protect their own nations. This is the notion of R2P. Historically, the author writes that R2P is only applied for 4 clear categories: genocide, crimes against humanity, war crimes and crimes of aggression. These, he says, should be regarded as R2P’s full extent. With these factors in mind, there is a risk that R2P is can possibly hold influence over the regime (sovereignty) through intervention.
(Taichiro Fujino)

Mr. Shogo Yoshida made a presentation on Hugh Breakey’s “The Protection of Civilians in Armed Conflict: Four Concepts” and “The Responsibility to Protect and the Protection of Civilians in Armed Conflict: Overlap and Contrast.”
First, he explained what the four types of POC are: Combatant POC, Peacekeeping POC, Security Council POC, and Humanitarian POC. Originally, (Combatant) POC’ roots are in the Fourth Geneva Convention of 1949 and Additional Protocols of 1977. However, the needs for United Nations Peacekeeping Operations have been increasing. Furthermore, diversified actors and approaches of POC have also been variegated into Combatant POC as well as Peacekeeping, Security Council, and Humanitarian POC. Nonetheless, these types of POC inherently serve only one purpose: Human Security.
Next, he compared POC with R2P in terms of their similarities, interactions, and differences. After his presentation, a participant pointed out that R2P looks simply like a law for the outbreak of war, whereas POC seems only like a goal or a means in the context of the difference between R2P and POC.
(Shogo Yoshida)

Mr. Jason Pratt gave a presentation on Vesselin Popovski’s “Interaction of the Norms of Protection.” The focus was on if the concepts of Protection of Civilians (POC) and Responsibility to Protect (R2P) can be mutually adhered to in international peacekeeping. Popovski asserts that the different scopes of the two concepts make them mutually reinforcing, which Mr. Pratt found a convincing argument. Popovski also argues against the opinion that R2P is interventionist and a challenge to state sovereignty; Popovski says that outside intervention is only a last option and that a sovereign is required to protect its people before intervention is needed. Mr. Pratt posited the idea that simply making threats may be translated as interfering in sovereignty. Discussion following the presentation focused on how POC and R2P relate to modern situations, such as within Afghanistan, as well as the need to further explore the preventative aspect of R2P.
(Jason Pratt)