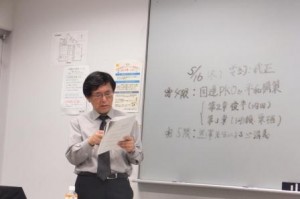 On 16 May 2013, two students, Mai Uchida and Yuhi Kawase, made presentations on PKO (Peace Keeping Operation). Mai Uchida explained, firstly, the connection between PKO and national interests. She mainly mentioned reasons why small states send a number of troops to other countries as PKF (Peace Keeping Forces). She reiterated that there were external and domestic reasons. As a conclusion, she pointed out that small states participate in PKO for not only altruism but also national profits.
After presentation made by Mai Uchida, Yuhi Kawase explained the legitimacy and concept of Peace Keeping Operation. In his presentation, he mentioned the progress of peacebuilding, in which there are four stages, preventive diplomacy, peacemaking, peacekeeping and peacebuilding. He finally defined peacebuilding as the activity which establishes suitable peace and protects states from reoccurrence of conflicts through state-building in various countries.
Professor Kurosawa lectured how to write an official letter in English. Then, he explained, firstly, peacebuilding frameworks, which are divided into three pillars i.e. military, political and economic and social framework. In addition to that, he pointed out that the conflict sensitive approach played a significant role in peacebuilding. Finally he introduced recent and past deployments of PKO in the world. The number of PKO activities is 67 in 2012 and 119.154 participants are deployed in the current PKO activities. (Keiki Takemasa)