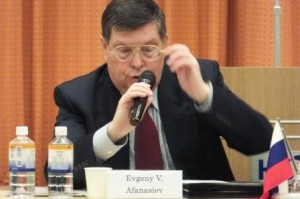 On 16 May 2013, His Excellency Ambassador Evgeny Vladimirovich Afanasiev of Russian Federation to Japan visited Hosei University and held a dialogue with professors and students. The ambassador explained the Russian foreign policy towards East Asia.
After opening remarks made by Mr. Fukuda, Ambassador Afanasiev mentioned the historical, cultural, political and economic relationship between Japan and Russia. In his speech, he emphasized the significance of cooperating each other for the prosperity of each society. He regarded the recent relationship between both countries as of optimum importance, and put an emphasis on improving the understanding and cooperation between each other. Ambassador Afanasiev also made a reference to the negotiation of peace treaty between Russia and Japan, and he referred to a progress to be made by the leaders of both countries as the significant goal for the development of relationship of two countries.
At the end of the symposium, we had a comments and questions session moderated by Professor Sukehiro Hasegawa, in which three professors commented, Professors Nobuto Shimotomai, Andrei Ivanovich Kravtsevich and Satoru Kurosawa. As a conclusion, Professor Hasegawa referred to the importance of appreciating various cognitions held by those concerned when it comes to solving territorial disputes. He introduced three indispensable ways to solve some territorial problems through (1) the role of ICJ; (2) a shelving of the determination and (3) the settlement of issues through dividing the territories equally as referred to by President Vladimir Vladimirovich Putin. In addition, Professor Hasegawa pointed out the importance of grasping different opinions held by both sides on territorial disputes. (Keiki Takemasa)