At a seminar held on 4th July 2015 in Tokyo, former Secretary-General Momoyo Ise of the Asian Women’s Fund and Professors Takaaki Mizuno of the Kanda University of Foreign Studies and Naoko Kumagai of the International University addressed the “comfort women” issue and stressed the need to learn about its implications.

Professor Kumagai explained to the students that comfort women are those women who claim that they as young women were taken to Japanese military compounds in many parts of Asia and, in many cases, forced to provide sexual services to officers and soldiers in the Japanese Army before and during the Second World War. Most comfort women were from areas where Japan colonized or made military advancement, such as Korea, Taiwan, China, and Southeast Asia.

Comfort women suffered both physically and mentally. In addition to rapes and violence, women also suffered from sexual diseases and infertility. During the postwar period, many women suffered from social stigma, discrimination, and PTSD. In patriarchal society, victims of sexual assault have been thought as shame for their family members and society. 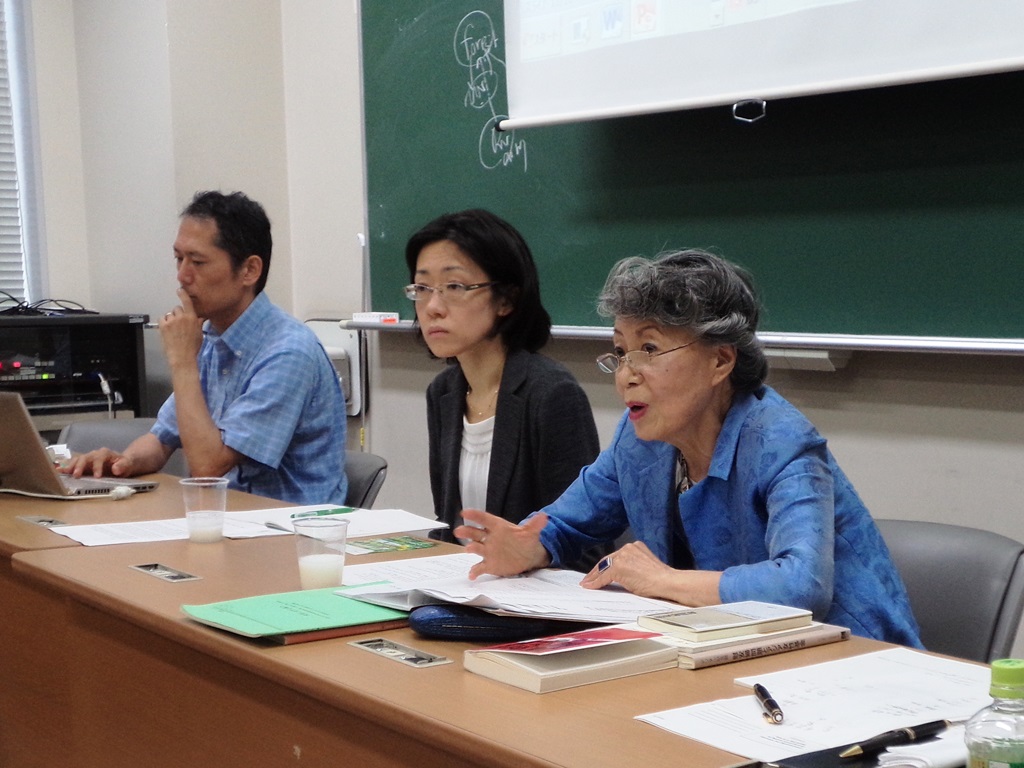 Kim Hak-Sun’s first public testimony as former comfort woman in August 1991 served to set the issue of comfort women as the social and political issue. Based on the investigation in 1992 and 1993, the Japanese government, in the Kono statement, acknowledged the wartime Japanese authority’s direct and indirect involvement in the establishment and management of comfort stations and apologized to the victims.

The Asian Women’s Fund, established in 1995, conducted the atonement project, which included they payment of atonement money donated by Japanese people to the victims of sexual abuse and Japanese Prime Minister’s letter to them. Many Korean and Taiwanese former comfort women, however, refused to receive atonement money. This is because those who refused believed that only state compensation, not atonement money, could recover their dignity.

Ways the atonement project was received differed depending on a country for which the project was conducted. For example, it was accepted by the Philippines as one person expressed that “We cannot forget but we can forgive you. Otherwise the God will not forgive me”. In Muslim country like Indonesia, it was very difficult to identify victims as they will suffer from their societal rejection. Accordingly, the project was organized in such a way to protect the privacy of former comfort women. In Confucius moral based Korea, the societal rejection against former comfort women existed. Further complicated the situation has been, including the issue of comfort women, the absence of historical reconciliation. The problem now has become politically central issue.

The language, “apology” has become a critical issue. The Korean positions oscillated among the Presidents and governments. For example, President Kim Dae-Jung was more accommodating of Japanese atonement while President Park Geun-hye has been hardest to Japan. Ms. Ise informed the Japanese students that “Young people are not responsible for war-time crimes of the World War II, but you will be responsible for the future, especially if you cannot maintain peace, and war crimes are to be repeated”. She advised the students that when they discuss with students from abroad, try to understand their feelings, history and culture and know Japan from their perspectives.

Professor Mizuno noted that the societal tradition that allowed the institution of “comfort women” to emerge not only in the areas occupied by Japan during the war period but also within Japan after its surrender to the United States in 1945. He pointed out the issue emerged only in the 1990’s by the efforts of peoples both in Japan and Korea. He advised the students that as young Japanese citizens, they had moral obligation, if not legal nor financial, to think of the lives of these victims.

(Drafted by Kana Horibe, Masakazu Nagamine and Akira Nakamura, and reviewed by the speakers)
—            —            —
Statement by the Chief Cabinet Secretary Yohei Kono
on the result of the study on the issue of “comfort women”

(August 4, 1993)
The Government of Japan has been conducting a study on the issue of wartime “comfort women” since December 1991. I wish to announce the findings as a result of that study.

As a result of the study which indicates that comfort stations were operated in extensive areas for long periods, it is apparent that there existed a great number of comfort women. Comfort stations were operated in response to the request of the military authorities of the day. The then Japanese military was, directly or indirectly, involved in the establishment and management of the comfort stations and the transfer of comfort women. The recruitment of the comfort women was conducted mainly by private recruiters who acted in response to the request of the military. The Government study has revealed that in many cases they were recruited against their own will, through coaxing, coercion, etc., and that, at times, administrative/military personnel directly took part in the recruitments. They lived in misery at comfort stations under a coercive atmosphere.

As to the origin of those comfort women who were transferred to the war areas, excluding those from Japan, those from the Korean Peninsula accounted for a large part. The Korean Peninsula was under Japanese rule in those days, and their recruitment, transfer, control, etc., were conducted generally against their will, through coaxing, coercion, etc.

Undeniably, this was an act, with the involvement of the military authorities of the day that severely injured the honor and dignity of many women. The Government of Japan would like to take this opportunity once again to extend its sincere apologies and remorse to all those, irrespective of place of origin, who suffered immeasurable pain and incurable physical and psychological wounds as comfort women.

It is incumbent upon us, the Government of Japan, to continue to consider seriously, while listening to the views of learned circles, how best we can express this sentiment.

We shall face squarely the historical facts as described above instead of evading them, and take them to heart as lessons of history. We hereby reiterate our firm determination never to repeat the same mistake by forever engraving such issues in our memories through the study and teaching of history.

As actions have been brought to court in Japan and interests have been shown in this issue outside Japan, the Government of Japan shall continue to pay full attention to this matter, including private researched related thereto.

(August 15, 1995)
The world has seen fifty years elapse since the war came to an end. Now, when I remember the many people both at home and abroad who fell victim to war, my heart is overwhelmed by a flood of emotions.

The peace and prosperity of today were built as Japan overcame great difficulty to arise from a devastated land after defeat in the war. That achievement is something of which we are proud, and let me herein express my heartfelt admiration for the wisdom and untiring effort of each and every one of our citizens. Let me also express once again my profound gratitude for the indispensable support and assistance extended to Japan by the countries of the world, beginning with the United States of America. I am also delighted that we have been able to build the friendly relations which we enjoy today with the neighboring countries of the Asia-Pacific region, the United States and the countries of Europe.

Now that Japan has come to enjoy peace and abundance, we tend to overlook the pricelessness and blessings of peace. Our task is to convey to younger generations the horrors of war, so that we never repeat the errors in our history. I believe that, as we join hands, especially with the peoples of neighboring countries, to ensure true peace in the Asia-Pacific region -indeed, in the entire world- it is necessary, more than anything else that we foster relations with all countries based on deep understanding and trust. Guided by this conviction, the Government has launched the Peace, Friendship and Exchange Initiative, which consists of two parts promoting: support for historical research into relations in the modern era between Japan and the neighboring countries of Asia and elsewhere; and rapid expansion of exchanges with those countries. Furthermore, I will continue in all sincerity to do my utmost in efforts being made on the issues arisen from the war, in order to further strengthen the relations of trust between Japan and those countries.

Now, upon this historic occasion of the 50th anniversary of the war’s end, we should bear in mind that we must look into the past to learn from the lessons of history, and ensure that we do not stray from the path to the peace and prosperity of human society in the future.

During a certain period in the not too distant past, Japan, following a mistaken national policy, advanced along the road to war, only to ensnare the Japanese people in a fateful crisis, and, through its colonial rule and aggression, caused tremendous damage and suffering to the people of many countries, particularly to those of Asian nations. In the hope that no such mistake be made in the future, I regard, in a spirit of humility, these irrefutable facts of history, and express here once again my feelings of deep remorse and state my heartfelt apology. Allow me also to express my feelings of profound mourning for all victims, both at home and abroad, of that history.

Building from our deep remorse on this occasion of the 50th anniversary of the end of the war, Japan must eliminate self-righteous nationalism, promote international coordination as a responsible member of the international community and, thereby, advance the principles of peace and democracy. At the same time, as the only country to have experienced the devastation of atomic bombing, Japan, with a view to the ultimate elimination of nuclear weapons, must actively strive to further global disarmament in areas such as the strengthening of the nuclear non-proliferation regime. It is my conviction that in this way alone can Japan atone for its past and lay to rest the spirits of those who perished.

It is said that one can rely on good faith. And so, at this time of remembrance, I declare to the people of Japan and abroad my intention to make good faith the foundation of our Government policy, and this is my vow.

On the occasion that the Asian Women’s Fund, in cooperation with the Government and the people of Japan, offers atonement from the Japanese people to the former wartime comfort women, I wish to express my personal(*) feelings as well.

The issue of comfort women, with an involvement of the Japanese military authorities at that time, was a grave affront to the honor and dignity of large numbers of women.

As Prime Minister of Japan, I thus extend anew my most sincere apologies and remorse to all the women who underwent immeasurable and painful experiences and suffered incurable physical and psychological wounds as comfort women.

We must not evade the weight of the past, nor should we evade our responsibilities for the future.

I believe that our country, painfully aware of its moral responsibilities, with feelings of apology and remorse, should face up squarely to its past history and accurately convey it to future generations.

Furthermore, Japan also should take an active part in dealing with violence and other forms of injustice to the honor and dignity of women.

Finally, I pray from the bottom of my heart that each of you will find peace for the rest of your lives.

Ryutaro HashimotoPrime Minister of Japan
(Subsequent Prime Ministers who signed the letter are: Keizo Obuchi, Yoshiro Mori and Junichiro Koizumi)(*) This word was omitted from the texts after 1998. 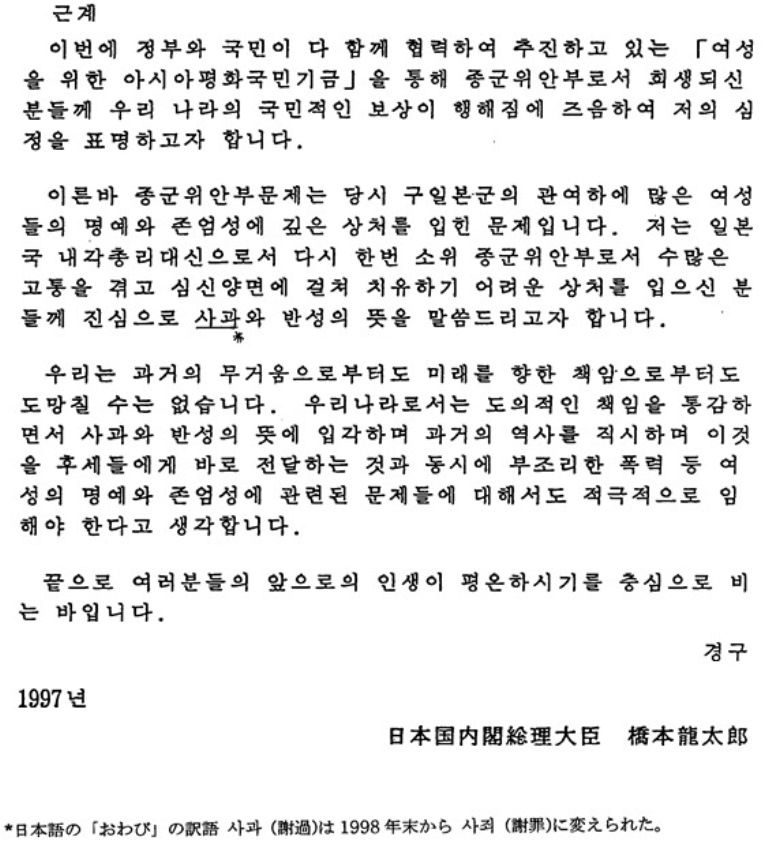