At the symposium held at United Nations Headquarters in Geneva on 15 June 2015, Hasegawa pointed out that Japan had deployed more than 9,000 self-defense forces and police personnel to 13 UN PKO missions in Cambodia, Mozambique, Golan Heights, Timor-Leste, Haiti, South Sudan and other countries and areas. Japan’s contributions were not only in the maintenance of security but also in capacity building in rule of law, public administration, and other aspects of state capacity building. He proposed that Japan, China and Korea cooperate in improving the efficiency and effectiveness of UN peace operations. Please see below the full text of his speech. 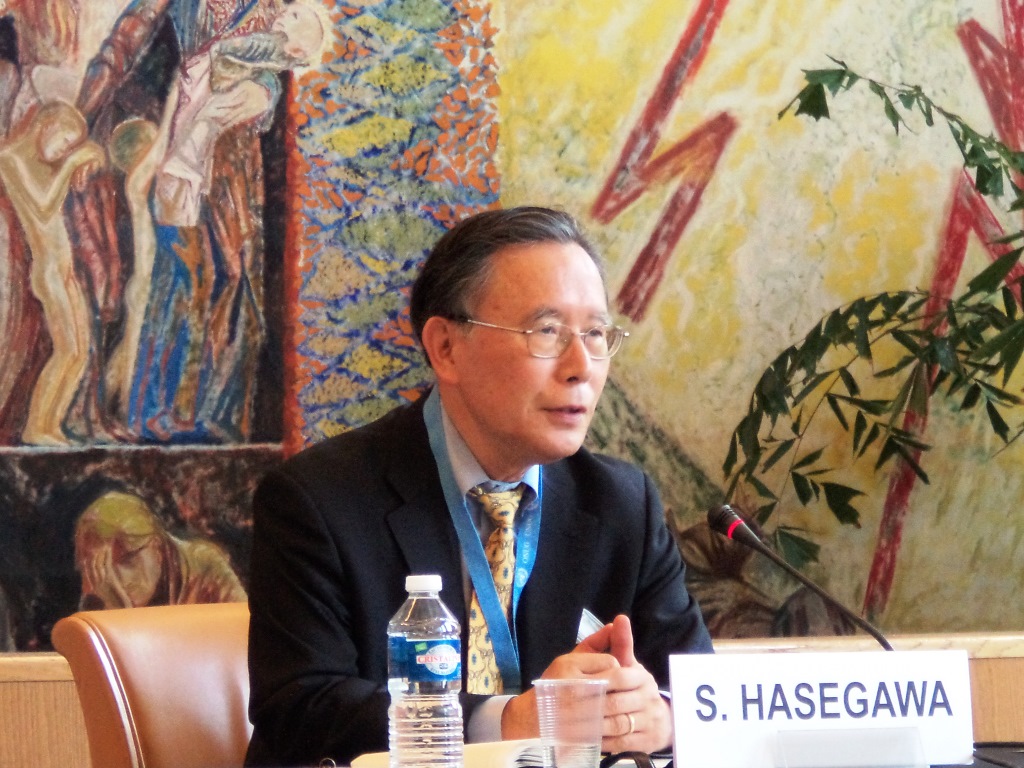 2. Japan has been the second largest financial contributor to UN peace operations, nearly 19.6 percent during the first five years from 2000 to 2005 and now 10.8 percent of the UN peacekeeping budget. Last year, Japan contributed more than one billion dollars.

3. As the chair and facilitator of committees, Japan has also contributed to the discussions in UN C34 (Special Committee on Peacekeeping Operations), the Security Council Working Group on Peacekeeping Operations, and Peacebuilding Commission. Japan has also taken a leading role in production of the UN Military Units Manuals and as the chair of the engineer working group, Japan contributed to the development of manuals of engineering units to provide more systematic support for field peacekeepers.

4. In order to strengthen human resources expertise in peacekeeping, Japan has hosted seminars and symposiums regarding UN PKO. Japan launched in 2007 the Program for Human Resources Development for Peacebuilding. From 2007 to 2014, this Program trained 164 Japanese and 138 foreigners from Asia, Middle East and Africa. Japan co-organized a two week GPOI Senior Mission Leaders (SML) training course for potential senior leaders for UN missions in collaboration with the United States in October 2009, in September 2011 and in November 2013 in Tokyo. The participants included 66 military, police and civilian officials from 15 countries in Asian-Pacific region. Japan also supported financially and with expert advice regional and national PKO training centers in Africa and Asia. About 20 SDF personnel and 33 civilians as lecturers to PKO training centers in Egypt, Ghana, Mali, Kenya, Senegal, Tanzania, South Africa, Benin, Cameroon, Malaysia and Cambodia and provided financial support of more than $40 million to the PKO training centers in Africa (11 Centers) and in Malaysia.

B. Challenges faced by Japan

The Japanese Government is interested in finding a solution to overcome these constraining factors and to cooperate more actively with other countries in UN peace operations. The Government has submitted draft laws to the Diet to allow the Japanese defense forces that are deployed as part of the UN peacekeeping forces to carry out security operations in order to protect personnel of other UN peacekeeping forces and civilians.

Japan is also interested in cooperating with other countries participating in UN peace operations in a tangible manner. For example, in December 2013 the Government of Japan responded positively to a request from the South Korean troops and provided 10,000 rounds of 5.56-mm ammunition to the South Korean peacekeepers stationed at a U.N. base in South Sudan’s Jonglei state when they had to protect thousands of civilians who had sought shelter from fighting between rival ethnic groups.

In my view, there is a possibility for cooperation between Japan and other East Asian countries and areas where UN peace operations are conducted, particularly in South Sudan. Peacekeeping forces from East Asian countries can share information about the situation in their areas of engagement. They can also share their technical know-hows and materials.

D. Development of Human Resources for Peacekeeping and Peacebuilding

1. Training of Human National and Local Personnel in Construction Equipment and Other Facilities

There is no policy governing the engagement of former military personnel in UN peacekeeping operations, but some retired Japan Self-Defense personnel have assisted in training local technicians in maintaining and operating construction equipment such as bulldozers and vehicles.

2. Training of International Peacebuilding Experts in Collaboration with the United Nations

Japan has encouraged active involvement of civilian experts such as human rights advocates, planners, administrators, lawyers and humanitarian experts as staff of UN peacekeeping missions and UN agencies such as UNDP, UNHCR, UNICEF and WFP as well as other international organizations such as IOM and ICRC.

In 2007, the Government of Japan commissioned the Program for Human Resources Development for Peacebuilding and has since trained 15 Japanese and 15 non-Japanese personnel each year. During the period of seven years, total of 85 person have been assigned to various UN and other international organizations in 43 duty stations.

3. Support to Peacekeeping and Peacebuilding Centers of Africa and Asia

Japan has been providing financial and technical advisory assistance to African and Asian countries in training their security and civilian personnel.

Japan along with other East Asian countries can address more actively the key challenges for the protection of civilians and relief workers engaged in UN peace operations.

How can joint East Asian PKO activities enhance UN humanitarian operations? Considering the United Nation’s emphasis on the importance of the role of civilian sectors in humanitarian assistance and disaster relief, how can we expand PKO cooperation among the four East Asian countries to other partnership schemes such as incorporating development programs and engaging with NGOs?

The four East Asian countries can expand their PKO cooperation to UN and other partnership schemes through OCHA at New York Headquarters and UN peacekeeping missions in the field. Joint East Asian PKO activities may enhance the efficiency of humanitarian operations by planning and delivering jointly humanitarian goods and services with PKO equipment and facilities. JOCs and JMACs of UN peacekeeping missions should be extensively used for planning and coordination of humanitarian activities. They should also strengthen their relationship in the field with the United Nations Humanitarian Coordinator (HC) and the United Nations Resident Coordinator (RC).

2. To improve women`s participation and their role in humanitarian assistance, the East Asian countries should implement diligently the UN Security Council resolution 1325 adopted in October 2000. The regional states need to take specific actions in order to (1) involve more women in decision making on conflict resolution and peace processes, at all levels; (2) develop peacekeeping training programs which would include the gender perspective; (3) protect women from gender based violence during the armed conflicts, especially from rape and other forms of sexual abuse; (4) include gender perspective into the UN reports on peace-building and implementation of the programs. The comparison of female participation in military and police personnel does reflect the importance that can be played by women in peacekeeping and peacebuilding efforts. Women can play critically important roles in humanitarian relief operations and development works. According to UN peacekeeping statistics, as of 31 March 2015, there were 106,854 uniformed personnel consisting of 91,932 troops, 13,127 police personnel and 1,795 military observers (PKO missions + 2 SPM). There were also 17,092 civilian personnel as of 30 November 2014 who consisted of 5,289 international and 11,803 local staff (PKO missions only). In addition, there were 1,800 UN volunteers (as of 31 December 2014). Among these staff and other personnel, there were only 13 Japanese civilian personnel (as of 31 December 2013) (PKO missions only), although Japan contributed more than $800 million dollars or 10 percent of total financial resources about $8.47 billion approved for the period from 1 July 2014 to 30 June 2015. Japan and other East Asian regional states should have more of our personnel engaged in the civilian component of UN peace missions.

F. Regional Cooperation for Institutional Building in Peacekeeping and Peacebuilding

Finally, we need to determine how regional states can exert collective wills and actions in order to resolve common security and humanitarian problems in UN peacekeeping operations. This question needs to be answered keeping in mind the prospects of East Asian PKO cooperation in enhancing human security through peacebuilding.

Japan is interested in laying the foundation for enhancing human security and sustainable peace by undertaking a series of programs and activities. These consist of political, administrative, legal, security activities as well as economic, social, and humanitarian activities. They should include activities designed to strengthen the rule of law, security sector reform, electoral assistance, protection of civilians including refugees and IDPs, food security and education. They should be carried out by not only international but also national and non-governmental organizations.

The East Asian states can collectively propose new ways of resolving common security and humanitarian problems by uniting and speaking as a group. For this purpose, the regional states must sit down and form a common stand in influencing the PKO polices and strategies. One way to facilitate this process is to establish a UN regional institute for peacekeeping and peacebuilding operations.

In practical terms, how would it be possible for the East Asian countries to build and facilitate a regional institution for PKO? Where do we need to start? Where to station the Headquarters, how to run the Secretariat, how to determine financial eligibility and contribution from each country, and who would be in charge?

Such a UN regional institution for peace operations may be called an Asian Institute for Peace Operations of the United Nations (AIPO) can be established in Okinawa as its location is central in the East Asia and its people has suffered a great deal from the World War II. The regional institute will be managed by a Director under the overall policy guidance of a Governing Council. The Director should be appointed on a rotational basis among the regional states and serve for a period of five years. He will be assisted by three Deputy Directors. The Governing Council should consist of one representative from each government, one former senior official of each regional member state who had served in UN peace operations, and one representative of non-government organizations engaged in humanitarian and development activities. The members will not be paid any regular salary payment, but they will be paid for honorarium and costs of transportation and accommodation during the meetings of the Governing Council.

This new Asian Institute for UN Peace Operations should work closely with the United Nations and ASEAN and other regional organizations in five areas: (1) conflict prevention, (2) peacekeeping (3) humanitarian assistance, (4) peacebuilding and (5) post-conflict recovery, reconstruction and development.

To realize the regionalization of UN peacekeeping operations, there is an urgent need to strengthen the regional representation in the Security Council of the United Nations. The regional states need to overcome the current disputes over historical and territorial issues and work closely together to reform the Security Council with a view to increase its presence and influence within the Security Council. If the East Asian states can coordinate their policies and make joint representations as the Scandinavian countries do in the United Nations, the influence that the East Asian regional states can exercise will be enormous. It would form a new paradigm of peace and security based on the conception of global governance away from that of the Westphalia system.