One day before Prime Minister Shinzo Abe made his statement or “danwa” about the 70th anniversary of the end of the War, Mr. Yohei Kono spoke on 13 August 2015 about its implications and ramifications in his appearance in a BS Fiji TV Prime News program (part1 / part2). 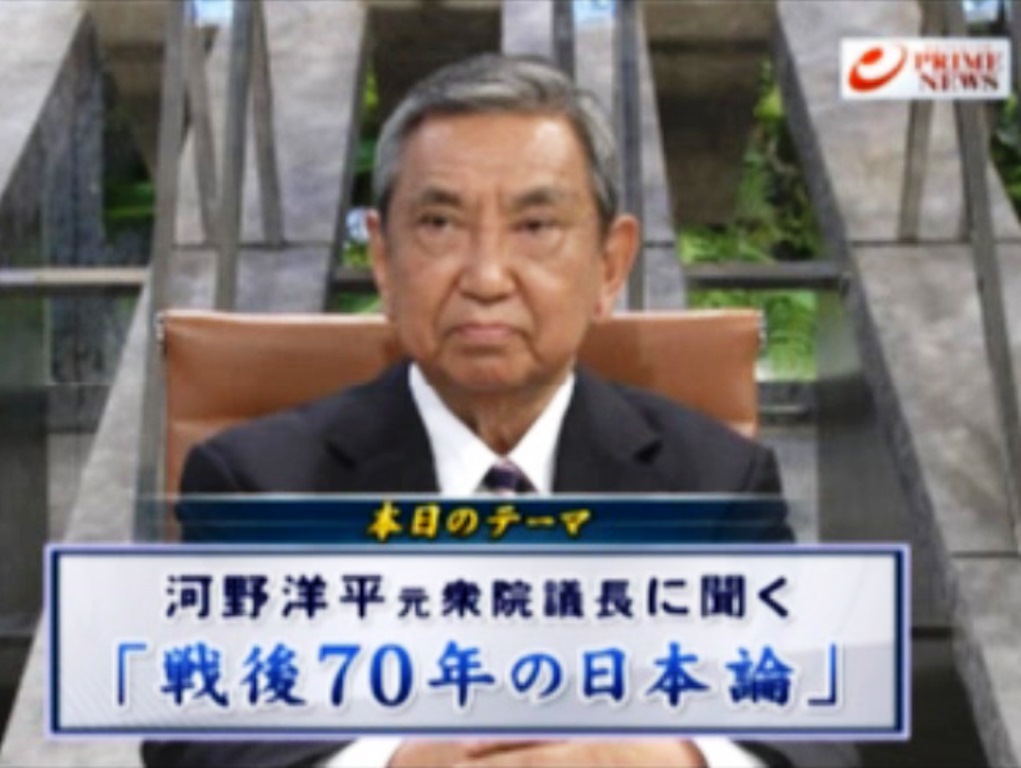 The following are key points made by Mr. Yohei Kono, former Cabinet Secretary, who issued a statement in 1993 indicating the outcome of investigations carried by the Government of Japan concerning the issue of comfort women.

1. In the 70th anniversary year, Japan should take a new initiative such as the establishment of a secular national facility which everybody can visit to commemorate war victims.

2. Japan should respond to the positive signals from China. These days China has restrained itself from criticizing Japan, possibly due to the importance of Japan as economic partner. The China’s perceived advancement in the South China Sea and the East China Sea should be examined rigorously based on facts. Genuine communication between the leaders of Japan and China is crucial.

4. As for the Kono Statement on the issue of comfort women, no assertion in it was made without verifying their evidence. What has been termed forced recruitment existed in the case of women from the Netherlands. Also, recruitment is not the only issue. The treatment of comfort women in comfort stations matters. Any criticisms of the perceived change in attitude of the South Korean government should be understood within the context of the domestic situations of South Korea.

5. It is important to establish a relationship of mutual confidence so that any political leader’s word or deed can be received in trust and confidence.

(August 4, 1993)
The Government of Japan has been conducting a study on the issue of wartime “comfort women” since December 1991. I wish to announce the findings as a result of that study.

As a result of the study which indicates that comfort stations were operated in extensive areas for long periods, it is apparent that there existed a great number of comfort women. Comfort stations were operated in response to the request of the military authorities of the day. The then Japanese military was, directly or indirectly, involved in the establishment and management of the comfort stations and the transfer of comfort women. The recruitment of the comfort women was conducted mainly by private recruiters who acted in response to the request of the military. The Government study has revealed that in many cases they were recruited against their own will, through coaxing, coercion, etc., and that, at times, administrative/military personnel directly took part in the recruitments. They lived in misery at comfort stations under a coercive atmosphere.

As to the origin of those comfort women who were transferred to the war areas, excluding those from Japan, those from the Korean Peninsula accounted for a large part. The Korean Peninsula was under Japanese rule in those days, and their recruitment, transfer, control, etc., were conducted generally against their will, through coaxing, coercion, etc.

Undeniably, this was an act, with the involvement of the military authorities of the day that severely injured the honor and dignity of many women. The Government of Japan would like to take this opportunity once again to extend its sincere apologies and remorse to all those, irrespective of place of origin, who suffered immeasurable pain and incurable physical and psychological wounds as comfort women.

It is incumbent upon us, the Government of Japan, to continue to consider seriously, while listening to the views of learned circles, how best we can express this sentiment.

We shall face squarely the historical facts as described above instead of evading them, and take them to heart as lessons of history. We hereby reiterate our firm determination never to repeat the same mistake by forever engraving such issues in our memories through the study and teaching of history.

As actions have been brought to court in Japan and interests have been shown in this issue outside Japan, the Government of Japan shall continue to pay full attention to this matter, including private researched related thereto.