Experts from Japan, China, Mongolia and Republic of Korea met and shared Lessons Learned from UNMISS operations and explored ways ahead. 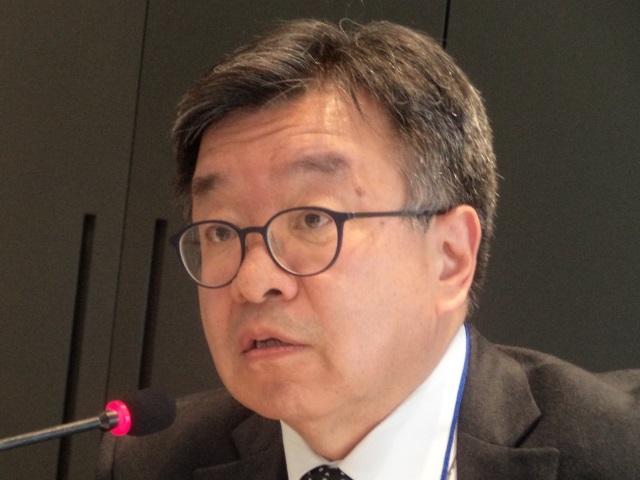 The following is a report filed by Mr. Takashi Kamishiro, former ICRC Delegate to Afghanistan, who participated in the meeting along with Professor Sukehiro Hasegawa, former Special Representative of the Secretary-General for Timor-Leste and Mr. Ken Inoue, Senior Advisor on Democratic Governance of JICA.

(1) In light of the current trend of the conflicts, Ms. Kang raised 3 issues: (a) primacy of politics, (b) effective partnership with regional organizations, and (c) strengthening the Peacekeeping Operations by taking more field-focused and people-centered approach.

(2) Professor Hasegawa furthered these points by referring to the African Union-United Nations Mission in Darfur (UNAMID). Each peacekeeping operation should be tailored made and, the military component should be aware of political implications of any security operations. It is critically important that the Peacekeeping Operations should be field oriented and people-centered based on his experiences in Rwanda, Somalia and Timor-Leste. For civilian, military and other components to act as one, it is also important to undertake the Integration Missions Planning Process (IMPP) as suggested by the Guidelines endorsed by the Secretary-General on 13 June 2006. 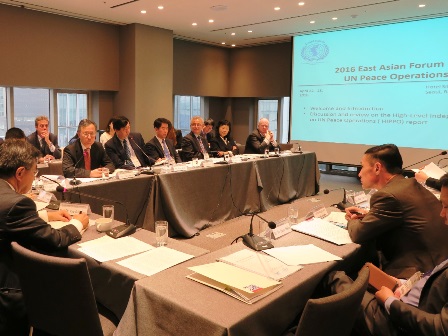 Conclusion: Some participants commented that there are too many issues that are beyond the capacity and mandates of the Peacekeeping Operations. Following the HIPPO report, the session analyzed the UN capability to solve all the problems in the world and the expectation towards the UN, and agreed that it would be important to prioritize the issues and to bring in other organizations in order to share the tasks and to attain sustainable peace.

The discussion was centered on POC. After the internal conflict broke out in December 2013 and UNMISS consequently shifted the mission priorities from peace building to POC, TCC had to change their activities accordingly.

The determination who is the civilian or not was identified as the most critical issue when performing the activities related to POC. The session concluded agreeing the need of universal approach (e.g. the Kigali Principles) on how to engage in POC.

Topics discussed:
* Presentation on challenges and lessons learnt from UNMISS
* Comprehensive comparison on the national lessons
* Discussion on possible contingencies

After the presentations about the challenges and lessons learnt by the participating countries, the following issues were mainly discussed.

Training:
Concerning the pre-deployment training for peacekeepers, the needs of training on POC, including Child Protection and Gender Based Violence (GBV), the ToT (Training of Trainers) by the United Nations Institute for Training and Research (UNITAR), and CMCoord were discussed and proposed.

Regional Cooperation in Peace Operation:
Based on the missions to Cambodia, Somalia, and Timor-Leste, in which the Asian Peacekeepers participated actively in the past, several concrete recommendations were identified. They were (1) more formal meetings in the mission headquarters and the UN headquarters in New York to share the information and best practices, (2) more leadership and thorough consultations among UN Secretariat, TCC and the UNSC, (3) use of Integrated Mission Planning Process (IMPP), (4) joint deployment for certain Peacekeeping Operations, (5) more use of military staff committee, (6) establishment of a Peacekeeping Operations training centre, and (7) the Asian regional support to UNAMID in terms of the logistics and the training.

Topics discussed:
* Engaging national governments and the review process
* Planning for the next Forum
* Action Plan

Summary of the discussions in each session:
(1) Opening Session:
(a) HIPPO report
(i) Primacy of politics,
(ii) Partnership,
and (iii) UN Secretariat must be more field-focused and people-centered, and

(b) Prioritization of the mission mandates

(2) Working Session 1:
(a) Discussion about POC

(3) Working Session 2:
(a) Coordination with other TCCs and mission components and challenges

(4) Working Session 3:
(a) Pre-deployment training for peacekeepers,
(b) CMCoord, and
(c) Asian regional support to UNAMID

Action Plan:
It was proposed that 4 countries form regular consultations among the TCC commanders in the field, and, in the mission headquarters and the UN headquarters, these countries engage more actively in drafting the mission mandates and priorities.

Planning for the next Forum:
(1) Upon producing the summary of the discussions, the recommendations will be submitted to the respective governments.

(2) The Forum should be more standing to increase the cooperation among the countries and to promote the recommendations to the respective governments and the UN Secretariat.

(3) All the participating countries agreed that the Forum will be hosted by the member countries as the rotational base.

(b) Timing: April or May 2017 (An initial invitation will be issued 6 months before the meeting.)

(c) Subjects to be discussed: The participants discussed possible topics for next year. They included: Civil Military Coordination, UN support to regional organization (i.e. AU), transition from Peacekeeping to Peacebuilding, robust Peacekeeping Operations, use of new technology, mobility of personnel and equipment, review of the experiences of other Peacekeeping Operations/regional arrangements

(d) Agreed Topic of the 2017 Forum: Protection of Civilians (POC): Its possibilities and limitations, or Its Ideals and Challenges