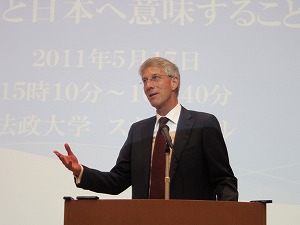 on May 17, 2011 with H.E.Dr.Philip de Heer Ambassador Extraordinary and Plenipotentiary of the Kingdom of the Netherlands to Japan. President Toshio Masuda of Hosei University welcomed the Dutch Ambassador in his opening statement. Following the introduction by Vice President Fukuda, Ambassador Philip de Heer delivered a speech on China’s emergence as a major power and its implications for Europe and Japan. Professors Hishida, Suzuki, Shimotomai and Mori commented on the Ambassador’s speech and Hosei University students asked questions to the Ambassador. (Kana Hashimoto)